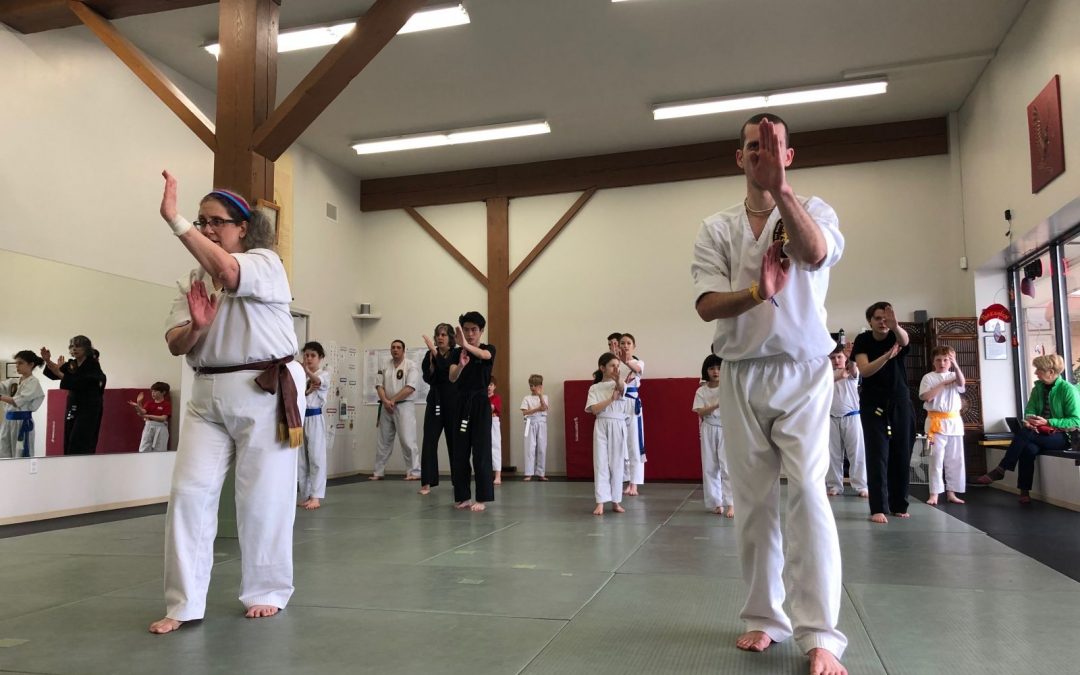 Read about one woman’s journey through her Black Belt test at Naga in the art of Poekoelan Tjimindie Tulen.

Below, watch part of Mas Twila’s board breaking sequence.

This is a test we will always remember. 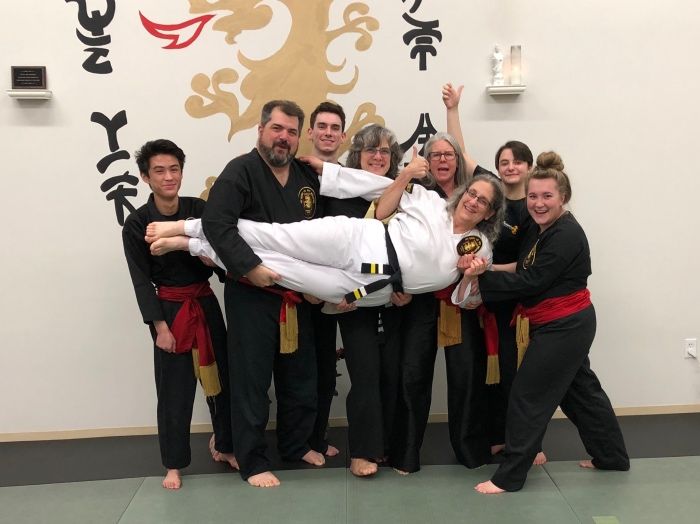 Twila being celebrated at the end of her test.

Reflections of a Black Belt

Shortly after becoming a black belt, Goeroe Silvia asked what the highlight of my test was.  I hesitated before answering, and gave the easy answer, “probably breaking my brick.”  Upon reflection there were many highlights besides that one; the bravery of lower ranking students, especially white belts, to fight with a black belt candidate; the short fights with a set-up and I was forced to “just do something” and not think about it; the times when the mind had to take over so the physical task was easier; everyone who came to meditate with me, including the parents of students and all ranks of students from white belt to 3rd degree black belt; the wonderful rice ceremony and the lowest ranking students who served; everyone who attended throughout the test and the rice ceremony; the compassion and support from teammates, past and current; the generosity of donors to my fundraiser; actually passing my test.  It is true that when one person tests, the whole school tests.

My journey to black belt began over a decade ago. Had it not been for several injuries and “life happening,” I probably would have been a black belt long ago.  The injuries and weaknesses have helped me be a better instructor – finding ways to modify holds and other standards for different circumstances and abilities.

My least favorite part of training has been fighting. On one hand, I’m fighting with friends and someone could get hurt. On the other hand, it’s safer to fight with a friend than a stranger trying to hurt me.  Would I be able to fight long, and hard, enough to get away to safety?

Before my test, I had trained inconsistently for the previous three years and had 7 months to get new and unfamiliar forms into muscle memory.  Had I known then, what I know now, I would have postponed my test a few months.  During my test I couldn’t remember the 5 more advanced standards and I mixed up two parts of the fan form.  I’m surprised I remembered all 5 of my kumbongs.  It has been said that sometimes the test is more about the journey than the test itself.  I truly appreciate the compassion of the Goeroes, Bantoe Lisa and Mas Eric.

I don’t want to put those standards away until the next brown sash and black belt test comes around, as we often do.  My Poekoelan journey continues by “making friends” with these standards by running them once a month.

My life journey continues by finding balance between life, work, training, strength and cardio conditioning.  With improved fitness, I can, and will be, better equipped to run away from genetics and lead a long and healthy life.

Here is Twila’s Board Breaking Sequence

Meet our other Black Belts here.