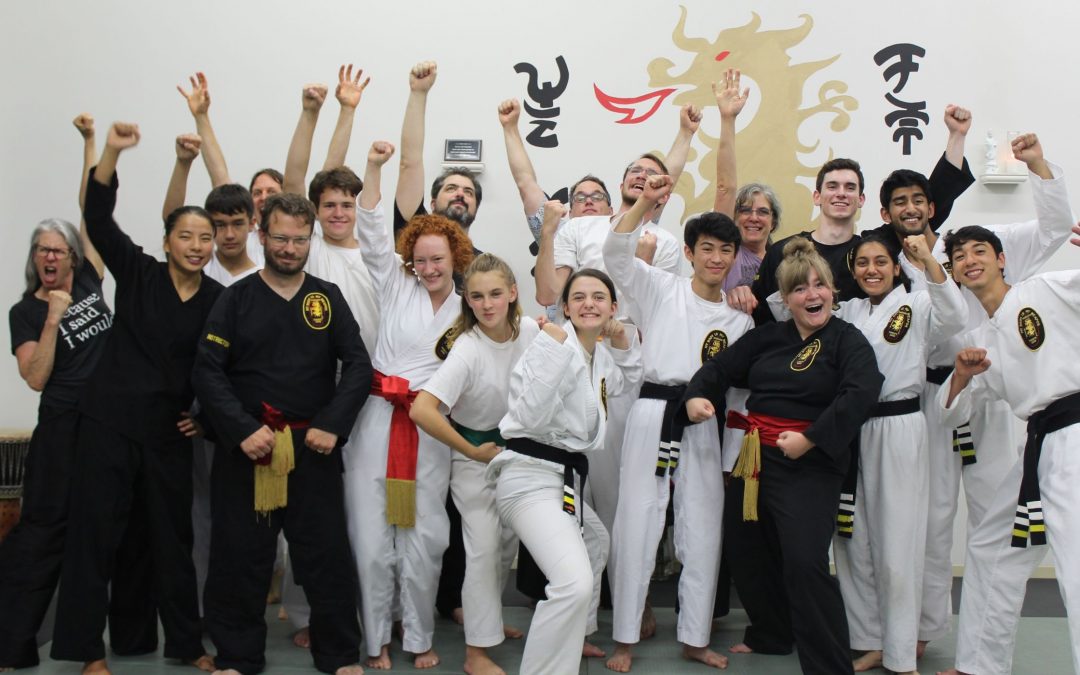 In our art and school, it takes much more than physical ability to successfully make it through a black belt test. Sure, we raise incredible fighters at Naga, but our Black Belts must also demonstrate fortitude, resilience, and strength of character. Confidence, humility, compassion, and leadership are just a few of the characteristics you will find in our Black Belts. Audrey recently wrote about her journey at Naga which she has allowed us to share with you.

Audrey began training with us when she was a mere six years old. She is front and center in the photo above, after completing her 48-hour black belt test in August 2018, surrounded by people who love her. 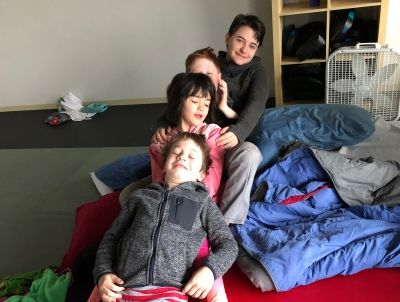 Audrey (in the back) with a gang of fans at our Spring Break Camp.

I’ve got a secret to tell you: I’ve always wanted to be like a Teenage mutant ninja turtle. You may laugh now, but I’ve trained at Naga, here with this family of fighters, and I’ve worked long and hard, and I can tell you now in confidence, that Raphael’s got nothing on me.

I’ve been here since I was just a bobbling little girl, aged six, and at my first class at Naga I thought I was going to be so good, they were gonna give me a black belt on day one. I thought that victory would be achieved as easily as walking into toxic waste with some friends, and I’d be a ninja turtle. I walked into the studio and waited to be blessed with superpowers. But I walk in and out of Naga the same person I’ve always been. No superpowers ever fell from the sky.

The second class I had at Naga, the instructor of my class made an analogy (big fan of those). They told us that we have to imagine our next sash or belt tied at the top of a pole. To reach it, We’ve got to scale a slippery, straight-up pole. It was going to be hard, but once you climb that pole, you’ll be able to look down to the ground and think to yourself “I’ve made it.”

I’ll let you in on another secret. I’ve never been able to climb. Never climbed trees, can’t climb those ropes in PE,  couldn’t jump fences. So when I heard that I would have to climb a pole? I panicked. But I’m still here because I asked my dad and he told me that it was probably metaphorical, not literal.

What I never could’ve expected was that I would learn how to climb. And more then that, I learned how to teach how to climb. As I grew older, years passed, that black belt was still tied to the top of that pole, I began to wonder if climbing a pole really was possible.

I couldn’t climb any poles for a long time, almost all of middle school I was on the ground. The pole to happiness? Too high off the ground, I don’t like heights. The pole of self-love? Too slippery. The pole to writing that book? Long and hard. The pole to that black belt? Never felt easy. What never helps us climb poles are the people who don’t want us too. They want to spread oil on poles to make climbing more challenging. We’ll slip sometimes on their words. “You’re not smart enough.” “Not strong enough.” “You’re just a girl.” “There are easier things to climb, you know.” But between you and me, the words cannot stop you, it makes that pole slippery, but you can wear the oil down, and you can do it anyway. And sure, that pole might never get it’s grip back, but it’s still scaleable.

If you’ve ever started climbing a pole, you know that every step gets harder and harder. You know that when you look down there is a Lion of fear. It prowls under your feet, and we need to remind ourselves that lions cannot climb poles. Lions cannot help us climb poles. The open jaws of the past are easy but they will swallow you whole.

The hard truth is that humans were meant to climb trees, not poles. We aren’t genetically modified, radiation emitting turtles, and climbing is hard. So where does that leave us? Nobody was built for this. But you know what every human is built for? Even better than a ninja turtle? Trying anyway. To climb poles, we climb until we get blisters, we help others climb those poles. We wave to one another from pole tops in love. All turtles can do is walk into radiation.

It took me nine years of crying skin and sweating eyes. But my oil coated hands found that black belt, and untied it from that pole top, tied it around my waist with real pride. I look down at the ground beneath me, and I tell myself “I’ve made it.” And then I saw people below me. I saw them, still climbing. Sliding on oil. So I breathe and slide down to meet them.

I’ll let you in on one last secret: I’ve never even seen teenage mutant ninja turtles. As a kid, I wanted to be one anyway. I looked at those turtles that I can’t even name, doing crazy fighting moves and thought “I want to do that.”

So come join the family. Were we all look at each other and think “I want to do that.” And not to spoil the story for you or anything, (it’s been foreshadowed) you can do that. It’s right up there, tied to the top of a pole. You can do it, you just haven’t done it yet. You can’t run that form. Yet. You can’t do that move. Yet. You haven’t reached the top of that pole. Yet.

All our some-teenage non-mutant, non-turtle instructors are here to scratch out that “t” in “Yet” and make it an “s.”

I’ve still never seen a ninja turtles cartoon, or read a comic, but I know that I could totally beat a sewer turtle in a fight. Saying yes to climbing a pole was something a turtle’s slippery hands could never do. Turtles don’t even have fingers. And sure, maybe I can’t climb trees yet, but there are people to teach me how to climb trees. You’ve got me beat in tree climbing, but what about pole climbing? It doesn’t matter, because we’re going to climb together. And when my history teacher one day called me a ninja turtle for teaching martial arts and self-defense I laughed at him.

I looked down at the ground, and I knew I’d made it, as a student, teacher, and ninja. 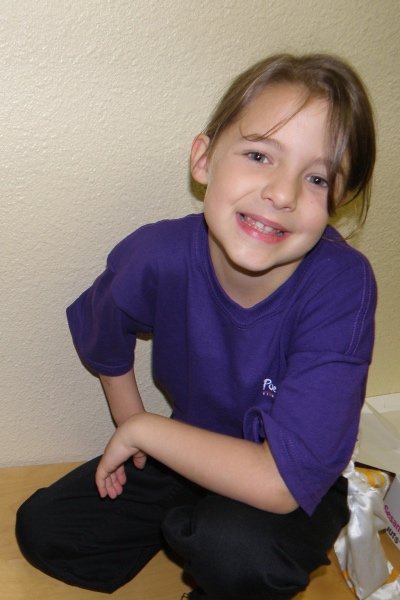 Little Mas Audrey as a camper herself way back when…and reading to our Little Monkeys who adore her.