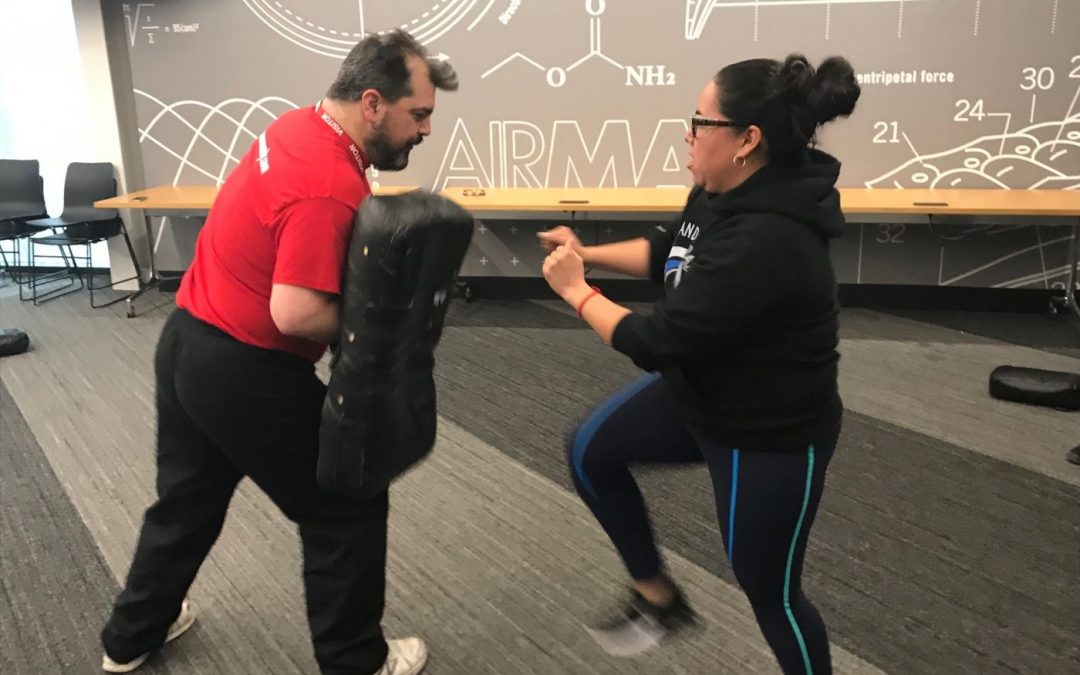 Recently, I had the opportunity to teach a self-defense class for the Women of Air – Nike Air Manufacturing. The women, all engineers, organized a series of workshops throughout March, Women’s History Month. 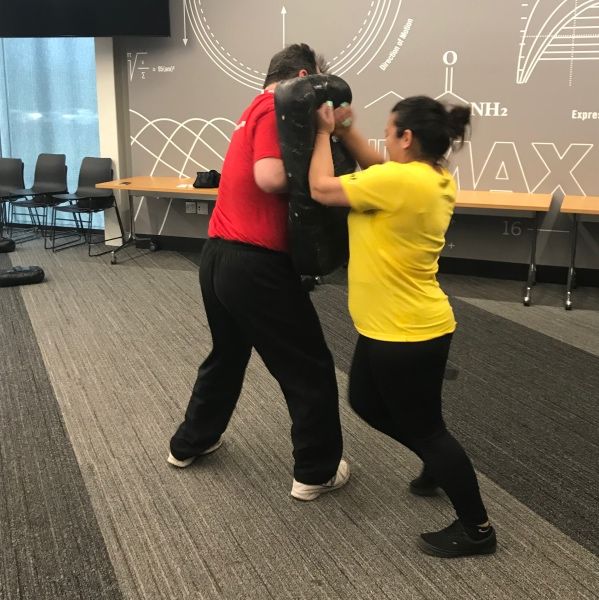 Nike chose Naga because of our openness to listen to what they wanted and our willingness to do what it took to make the class work for their team. Companies and their employees are busy! There are always considerations like time constraints, budget and the actual physical space available. They found our process engaging and simple and felt that communication with us was clear and easy. They appreciated our background and skill. The fact that we would design a class specifically to fit their needs and those of their participants sealed the deal.

Why Corporate Self Defense Training?

Employee retention is more important than ever as markets shift and change.  Getting and keeping a good team is crucial to any organization’s success. A good salary and healthcare are pieces of the puzzle, but employee engagement is what makes a company stand out in the current competitive climate. It is essential for corporations to bump up their benefits game and to offer a full suite of wellness and team building programs for their employees. “Wellness” brings to mind smoking cessation, fitness competitions or healthy eating challenges, but proactive employers are thinking way outside that narrow box.

We know that one out of four women has reported experiencing sexual assault and that the statistics for crimes against the LGBTQ population are rising. These violations occur both on and off the job and often inflict serious long-term emotional and psychic damage to the survivor. We know all survivors benefit from the practice of standing up, speaking up and embracing their personal power. Smart employers offer this training to their teams.

We know most men are good and kind, and respect other human beings. We know they want to support and encourage their colleagues. Men benefit from inclusion in this training too. I’ll never forget the guy from a real estate management company. He came into the self-defense workshop and told a sexist joke. When I said I didn’t think it was funny, he became quite angry and told the group he was only there because he had to be. This was the same man, who, at the end of the training, said, “I had no idea you women live with so much fear! I honestly never knew almost all of you have experienced abuse, and assault! I swear, I had no idea! I promise to look for opportunities to support you and listen to you more.”

Peace of Mind is Priceless

Personal safety, self-defense, de-escalation, and active shooter training create peace of mind when taught by a professional with the right background, skill, information, strengths, and sensitivities. When participants are engaged with the instructor, the presentation itself, and with their own team, doors open for communication and solidarity. Personal and professional empowerment and a safe work environment promote wellness and so much more! 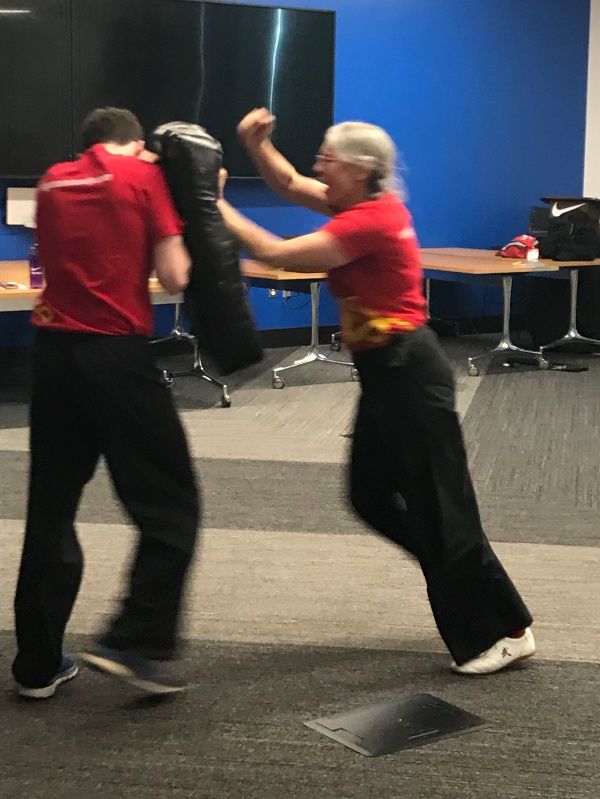 Companies Want to be Proactive, Not Reactive

Self Defense is a life skill. It is important to know what to do before you need it! Genentech Engineering was celebrating women employees and organized a women’s self-defense class on their campus. Most of the women reported no on-the-job concerns, but there were plenty of off-the-job fears and experiences like walking or running at night alone or in isolated areas, being home at night while their husband was away, and traveling solo. Several of the women shared their histories of sexual assault. This company has created a safe work environment per se but saw value in offering their female employees life-changing empowerment skills they can use every day for the rest of their lives. 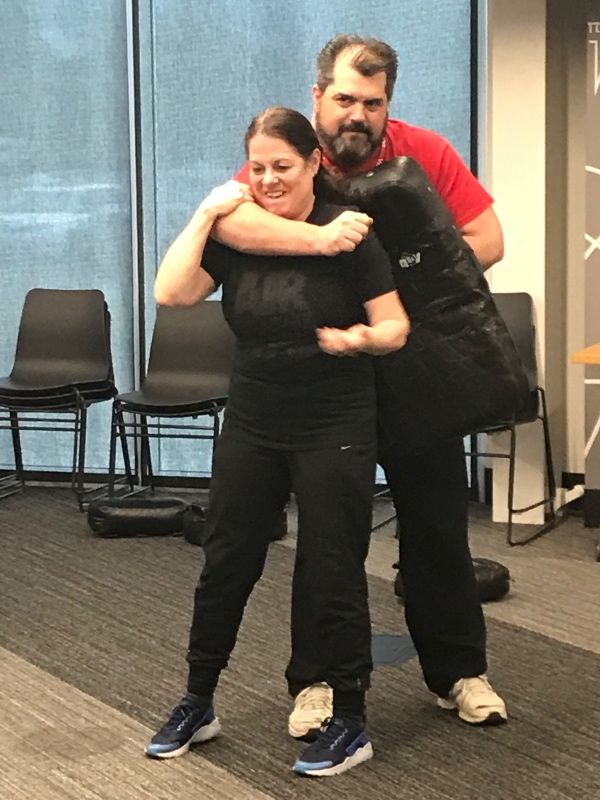 TriMet organized a De-escalation workshop for their customer service team. These are the workers who go on the frontlines when buses break down or someone needs to be escorted off MAX. These men and women told me about getting spit in the face, getting yelled at, and breaking up fights. The week after our workshop, the organizer and I were on the phone. He told me that one of the men came to him the day before saying, “Today, I used the de-escalation Silvia taught us and it totally worked! I feel like such a badass!”

Dr. Marten and HDR Engineering both offered a series of self-defense classes for the men and women of their corporate offices. The classes took place around lunch time and participants were offered simple catered meals. In both cases, we worked together to create a supportive and cohesive group. Our workshops incorporated honing the on-site safety plans and making sure everyone was on the same page. Communication and this type of training create safety for the entire team.

Simple Bank is a company that wanted to give their safety team some information and training about surviving an active shooter assault. This group was charged with creating a plan in the event that they’d have to deal with such a threat. It is awful to have to think about and prepare for these events, but self-defense is about planning and preparation, just like learning first aid. These are life skills. Kudos to them for being proactive.

Meanwhile, Back at Nike…

The eager participants came dressed to kick butt. The smiles on their faces showed me they were ready to learn. This fierce and fearless group of women walked in already owning their personal power. It was an honor and a joy to add to their skill set and give them practice that will continue to fuel their confidence. We brought two big black belt guys with us so the women could hit as hard as they were able – and they did! From the oldest to the youngest, they really let loose!

The enthusiasm in the room was contagious. Nodding heads, raised hands and shared stories gave ways to loud yelling and hard striking. The participants literally jumped in with both feet. Eyes lit up, the walls reverberated with cheering and the serious moments and discussions were followed by joyful release. This is the magic, the moments of impact when participants feel the jolt of personal power deep in their gut.

When You are Ready

When your company or organization is ready, fill out a contact form and let’s talk about what you and your team really need. Let us design a self-defense, de-escalation or active shooter workshop or series of workshops just for you and your deserving employees. It’s easy, it’s important, it’s empowering and we will make it work for you!