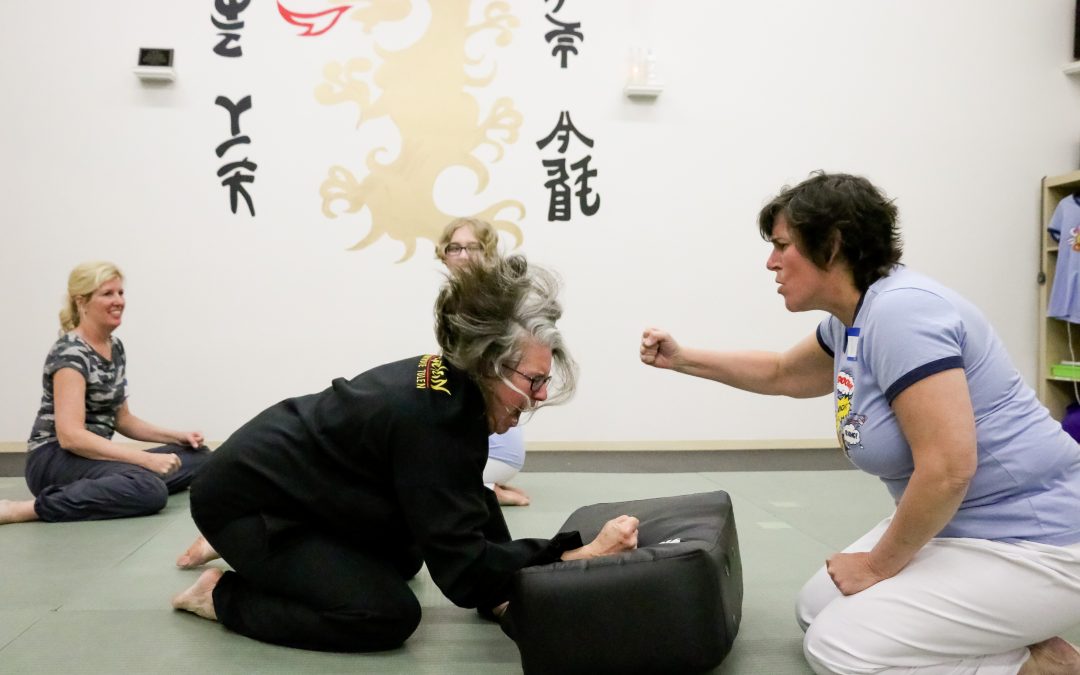 Restoring Goodness and Safety Through the Transformative Experience of Self Defense

As a self-defense teacher for the past thirty years, I have seen countless women find healing from the trauma of sexual assault through their participation in class. I’ve had the opportunity to teach private, public and non-profit groups, at colleges and universities throughout Oregon, at my own martial arts school, and at corporations & organizations throughout the city. Each set of workshops is unique and is informed by the participants, their circumstances, the context of the class and what’s happening in the local, national and international news. At the same time, there are some things I can always count on being the same:

I’ve often puzzled over this “magic” as I watch women transform their fear into power. My gut “gets it”, because it’s my experience too, but what does it mean? How does this work, and why does it happen? How can I describe this metamorphosis when the shift is such an internal one? 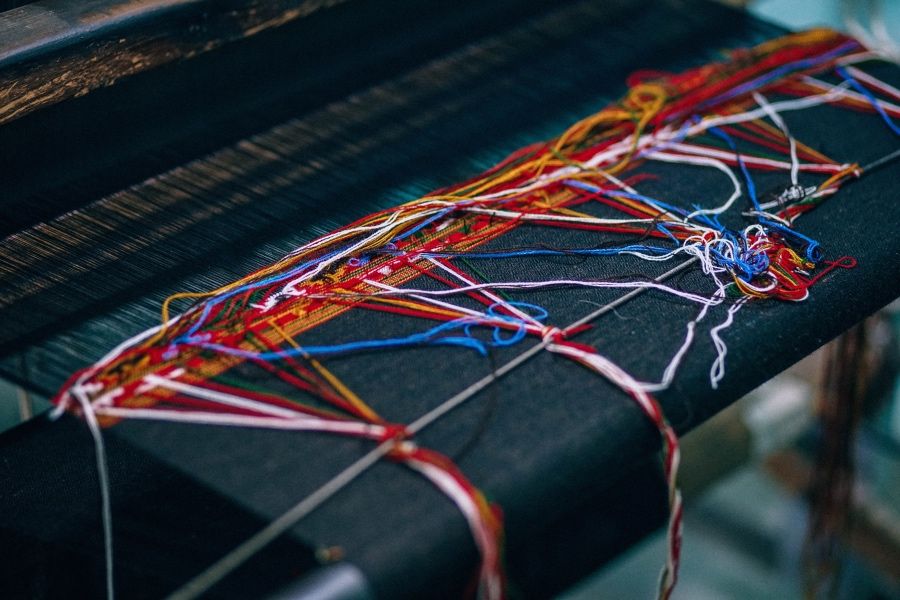 A few things came together for me recently in the form of an article, a book, a podcast and a play. As the strands of thoughts connected, and since writing helps me process my thoughts, I decided to weave them together, here, with you, in my blog.

The Continuum of Sexual Assault

In my self-defense classes, I talk about the continuum of sexual assault. The continuum is a range of behaviors perpetrated against women since the dawn of time. They are sadly, still alive and well today. This is one of the ways I describe the scope of violence against women:

Statistics, based on highly underreported accounts, tell us that one in four women will be raped in her lifetime, usually by someone she knows and trusts. This assault is found at the most violent end of the spectrum along with torture and murder and is the very definition of trauma at its deepest and most comprehensive core.

On the less brutal end of this continuum lies the behavior most women, if not all of us, deal with regularly: A steady stream of put-downs, a daily dose of inappropriate comments, uncomfortable ogling or unwanted touching, interruptions, manspreading, condescension, and downright disrespect. This is the stuff of being a woman in the world and, I would assert, always has been.

These behaviors, from the least cruel to the most vicious, take their toll on the body, mind, and spirit of every woman I have ever met, though, of course, to varying degrees. And when you add in the effects of transgenerational trauma, well, there’s a lot going on here! At some level, being a woman in and of itself involves experiencing some form or degree of trauma at worst, disrespect and disregard at best. I absolutely do not equate trauma with victimhood, by the way, just to be clear.

The Article, The Book, The Podcast and The Play

I read a book review in the New York Times last fall about trauma and immediately bought the book, “The Body Keeps the Score: Brain, Mind, and Body in the Healing of Trauma.” You know how things seem to go in threads? You become aware of something and suddenly you see it everywhere? This happened to me.

I was in California visiting my son in early winter when I stumbled upon a podcast of an interview with the author of the book, Bessel van der Kolk. Then, this spring, while visiting my daughter in New York, I serendipitously got the opportunity to meet two actors and find out about their work and research. They founded an organization to support veterans in their healing from the trauma of PTS using theater, particularly Shakespeare. Their organization is called De-Cruit.

The good fortune of sitting in an information session with Stephan Wolfert and Dawn Stern led to an invitation to see Wolfert’s one-man piece, “Cry Havoc” the next afternoon. I learned that the science of their research shows results that go way beyond typical talk therapy in the healing of trauma and I became inspired to dig deeper into my own experience as a self-defense teacher. 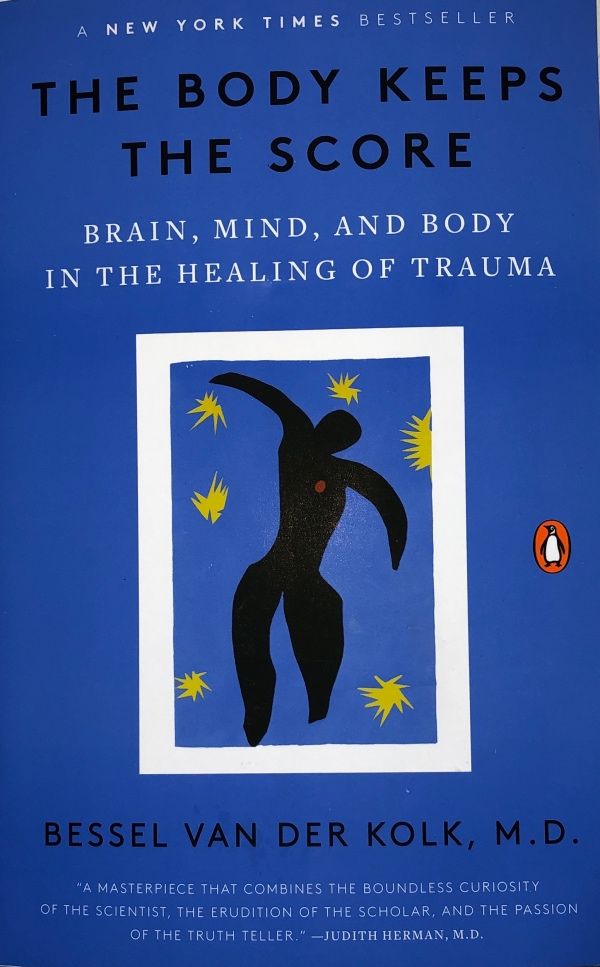 There is a body of research around trauma and how it affects both the brain and the body. In the podcast mentioned above, “On Being” with Krista Tippett, she interviews van der Kolk, a psychiatrist who has made the study of trauma his life’s work. He has written several books, the most famous of which is the book “The Body Keeps the Score”

In her introduction, Tippett says van der Kolk is, “an innovator in treating the effects of overwhelming experiences on people and society. We call this ‘trauma’ when we encounter it in life and news, and we tend to leap to address it by talking. But Bessel van der Kolk knows how some experiences imprint themselves beyond where language can reach. He explores state-of-the-art therapeutic treatments, including bodywork like yoga and eye movement therapy.”

Van der Kolk is the father of research about trauma and its effects on body and mind. He studies how surviving brutal and awful situations and experiences imprint themselves on a person’s whole being, very deeply, and from the inside out.

Talking about trauma with a therapist or counselor can be helpful, according to van der Kolk, but this method touches only one aspect of the healing process. Trauma settles itself profoundly and thoroughly into a survivor’s very body and psyche, affecting every part of that person’s experience and perception. It makes sense, then, that using other therapeutic avenues can only help deepen and maybe even speed up, the healing process. 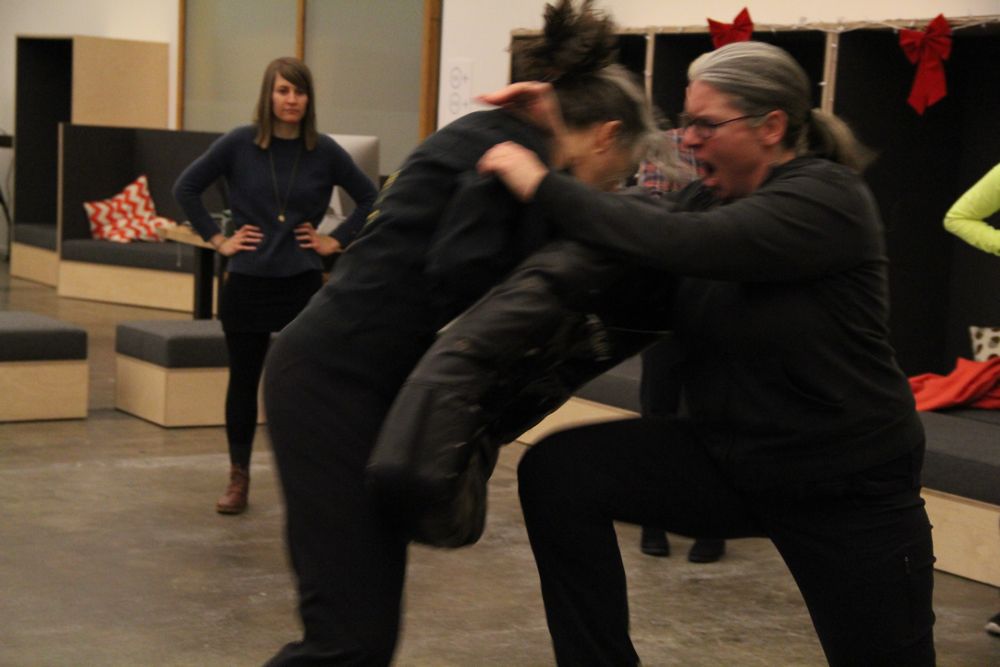 Concepción de León, wrote the New York Times book review I read last fall that started me thinking about all of this. She writes that van der Kolk sites “three avenues for recovery: ‘top down, by talking, (re-) connecting with others, and allowing ourselves to know and understand what is going on with us’; ‘taking medicines that shut down inappropriate alarm reactions’; and ‘bottom up, by allowing the body to have experiences that deeply and viscerally contradict the helplessness, rage, or collapse that result from trauma.’ Survivors usually need some combination of the three methods, writes Dr. van der Kolk, but the latter is most neglected.”

This connects directly to my experience as a self-defense teacher.

Healing Through Self Defense

Hitting pads is always a highlight of my classes. Furrowed brows soften, laughter echos around the room and shoulders relax as the weight of the world falls away from women’s’ shoulders. “I love hitting!”, “I found my voice!” and “I didn’t know I could hit so hard!” are hands down, the comments I hear the most.

“The best way to overcome ingrained patterns of submission is to restore a physical capacity to engage and defend.” 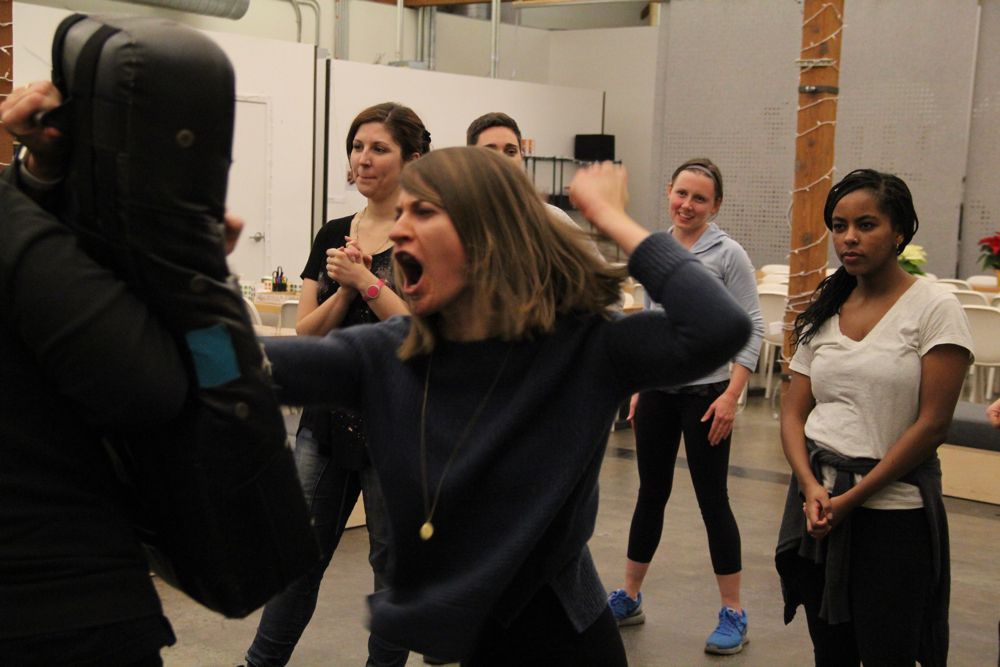 It makes sense! As women, we live in a world where we deal with the continuum of assault every day. We have integrated, from time immemorial, messages of powerlessness and victimhood, even when we try not to, or don’t think we did. Again, to be clear, I am not claiming victimhood for all women. Not at all! On the contrary, our resilience and strength in spite of these odds is mind-boggling!

Here’s what I DO claim: Letting loose, yelling at the top of your lungs and hitting pads is to feel a fierce and fearless strength coursing through your body in an intense and visceral way. Claiming your voice and standing in your power is life-giving for women, especially for those of us who are survivors of the trauma of sexual assault. The practice of yelling and hitting in a safe space with other women who understand and don’t judge creates healing for the body and mind. This very act turns history on its head. This surge of empowerment can restore goodness and a sense of safety in places where it may have been lost.

When you feel and experience the power of your body, you can’t help but acknowledge that you ARE powerful. Internalizing this empowerment leads to healing! Bingo! THIS is the transformational potential, the “magic” of a good self-defense class!

The Body Keeps the Score: Brain, Mind Body in the Healing of Trauma

On Being with Krista Tippett